I. On Choosing Liberty 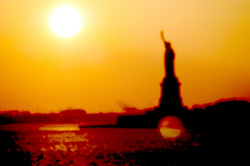 I have often been filled with regret that I and my fellows did not somehow make our position more clear, although I confess that I have been unable to discover anything we might have done to make the true nature of our revolution plainer to you. We had no desire for revolution, and even less for an armed one. It was, simply stated, that King George offered us two very unhappy alternatives.

It was our desire, and we spared no effort to manifest it, that we remain under the flag of England. We attempted every legal device to obtain relief from the arbitrary and abusive policies of the Crown, and at length resorted to some illegal ones too, before it became clear that we would receive no relief. We sought only to enjoy the natural rights of English subjects, but the oppression of the King and Parliament forced us finally to raise our own flag and defend our liberty.

Some of your papers are as irresponsible in your day as some of ours were in our time, for you have been told, and that by those who should have known better, that we were a “bunch of radicals, rebels, and extremists defying our establishment”. There is but the smallest shred of truth in that, for they neglect to remind you that we had enjoyed self-government with little interference from England for a century and a half (almost as long prior to my time as you are after it) before we were pressed to the wall and obliged to choose between tyranny and liberty. We wanted only to maintain that self-government, not revolt against it, to reestablish our rights, not to throw off a government just to prove some dubious principle. There was among us very little of that haughty defiance that marks your rebels. There was only a sad determination that we would have to exchange lives for liberty, and the joy of knowing that we had made the choice for which we would be proud, whether we won or lost the approaching struggle.

You see; King George was the radical who set about to create havoc in our midst, but we refused to submit. Radicals and extremists indeed! Here here! You malign us! We decided against our will (but according to our best judgment) to make a stand and regain our rights. Then we set our hand to the task of forming a government wherein it should have been very difficult for our condition to have been repeated.

But alas, our fears for the welfare of liberty in this nation were more founded in fact than we had ever wanted to admit, for your condition now is much too similar to ours then,

We gave you a republic of states with sovereign powers in the necessary functions of government with certain defined and limited powers granted to a small but effective federal government. But now that government is drawing authority and influence to itself at an alarming rate, and threatens, if allowed to continue unchecked, to even overshadow England's former abuse of the colonies. But there is a cause to all this.

The King used his prerogative to pamper and flatter his vanity by plundering our wealth and heaping unto himself the products of our labor. Some of your public servants, particularly in the last several decades, have rediscovered that ancient craft. Do you not see that they defraud you of your riches and gratify their own conceits? They abuse the necessary power of taxation to take your wealth, then use it upon you to plan and regulate your economic, social, educational, and even your moral and religious life. These high-minded politicians fancy themselves wiser than you. They would transform our republic into an aristocracy!

For our ruler, it was the most presumptuous vanity to think that because he was King he was judge and lawgiver; that his will had the weight of natural law. Your rulers today suffer under a similar but more subtle delusion. They have put their noses to the books (with all their high-flown and complicated ways of describing the simplest things) and studied law, science, economics, sociology, statistics, and the science of politics; yet they, with all that learning have more than anything else learned the conceit to fancy themselves better prepared to govern your life than you.

And what is the source of all their learning? They have not properly studied the rise and fall of nations, but prefer to teach one another their favorite new theories of governments and so-called social orders. New indeed! Those theories are old as the Theodesian Code of ancient Rome! We considered them unfit and with one mind rejected them. They are all aged forms of oppression and pillage of the people by the aristocracy. Beware of them!

They have not comprehended the most fundamental of truths; that the essence of the republic we gave you (which they persist to call a democracy, a government we carefully shunned) was, that only the people have the right to govern the people: that whatsoever is more or less than this is either oppression on the one hand or anarchy on the other. They have lost faith in the ability of the people to choose what is best for themselves. But what is more, they do not perceive that even if the people fail to choose the best, it is nonetheless far to be desired to be free and be wrong than to be a slave and be perfect.

Now stand back here with me, if you will, and view our nation as I see it. When the Constitution was first applied, a sense of order, unity, confidence, and peace came upon the land that far surpassed our most eager expectations. It was sublime beyond our ability to describe. The new nation rose powerfully and majestically; the eyes of the world were upon it. In a few decades that laughing stock of governments became the most compelling political Mecca. It was the hand of Divine Providence made manifest to the great blessing of the society of mankind.

Now observe how, as the fundamental principles of the Constitution were tampered with (by amendment and by what I must call judicial usurpation), the workings of that carefully balanced engine of state began to falter. That faltering seemed to demand yet more change. And more rapidly and frequently the changes have come, and always they have brought you more troubles and only made matters worse. Can you see how, through the years your despair has grown in proportion with your alterations and violations of the Constitution? It is quite obvious from where I stand. Though I desire it not, I am compelled to chide you for this, for we were careful to warn you, yet you heeded not. But I tell you, your shortsighted cures have caused your disease!

Your learned men tell you more reforms are desperately needed now, and well they might, for in that they are correct. However, when you inquire of your politicians as to where the source of your problems lies, they answer only what they themselves are wont to believe: “times have changed; things are different now; the world is smaller; things are a lot more complicated now” (they have seen to that!), and on and on. Ridiculous! A poor sham! But you must recognize that their alternatives are few, for they know that it is either that times have changed or that their wisdom is foolishness.

Of course times have changed, but that is hardly relevant to the question. I will show you why. First, the Constitution was not based upon any particular economic or social order (as some have claimed); we assiduously avoided that, for, you will recall, we had only recently fought a bloody and discouraging war to secure our liberties, and we earnestly desired that you, our children, should be spared such a necessity whatever your social or economic system might become. Nay, twas not that at all. The Constitution was but upon a painful recognition of the folly and mischievous nature of man: hence the checks and balances. Second, we recognized that there are only two legitimate sources of the power to govern: the Creator and the people. Whenever men have acknowledged any other power, they have submitted themselves to one form or another of tyranny. It is really quite that simple.

Now you, my sons and my daughters; you stand in a middle ground having on the one hand the protections of the Constitution and the ability still to use it to reestablish government by the people, and on the other hand you have drifted at an ever quickening pace back toward the oppression that we managed to throw off. You must awake and gather your strength. You have so long enjoyed the peace and prosperity of your freedom that you have gone to sleep, Up now, and clear your heads! The die is cast for you too. Your government is nearly out of your control. You too must submit or triumph. Thank God you will not be required to pay the price we paid if you will be about the business of your government and not leave it to your over-eager learned men. If you will move carefully, intelligently, and without undue delay, you may effect the salvation of what is still far and away the most legitimate government on the planet.

Be aware however, that your danger is more than considerable, If your government should gain the upper hand in your day with all its instantaneous communications, statistical projections, psychological drugs, and computers with unfailing memories; it could put to naught the combined tyrannies of the centuries for control not only of the products of your labor, but your very deeds and even your thoughts. You must make your drive for freedom, lest by default you allow the prevailing forces to propel you back down and return you Sons of Liberty to the dungeon from which we so recently redeemed you by the sacrifice of our fortunes and our lives.

I will give you the counsel Moses gave our forefathers wherein he exhorted them to elect wise men of understanding whom they knew to be true. Seek out men of that nature!

There are men among you with that requisite wisdom and integrity to lead you back to the full freedom whence you have come; but of even greater significance, these men, when you find them, will lack the presumption to seek to be your protector and savior and to have the glory and honor of caring for your every need. These men will desire only to be free men, and to allow all men the opportunity to lift themselves (with the help of Divine Providence only) by their own diligence, even though that opportunity must also give them the equal chance to falter and fail. Yes, there is the substance of your choice and the essence of your challenge. And in that connection I will remind you that we gave you for the symbol of our nation, not a well-tended goose in a cage, but an eagle: free, unfettered, independent, and close to God.